The Magical World of Miyazaki: My Neighbor Totoro

This week on The Magical word of Miyazaki I want to take you on a journey to see My Neighbor Totoro. So let’s the call the Catbus and be on our way shall we. My Neighbor Totoro came out in 1988 but wasn’t in the US til 1993 with a slightly different name of My Friend Totoro. It was released on DVD twice once in 2004 by Fox Video and then 2006 by Disney. Back in 1988 it won the Animage Anime Grad Prix and the Mainichi Film Award. Miyazaki and Studio Ghibli at this point were putting out another film and it was sent to cinemas as a double bill. Which was Grave of  the Fireflies. Which I will come back too in a future review.  It follows two young girls Satsuki and Mei whose father is a professor and moves them to a rural town. Where they discover some magical wood spirits. 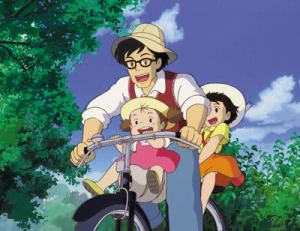 This story again is a really beautiful and as with a few of Miyazaki’s film Japanese folklore and myth play a part in the telling of this tale. As I have mentioned above the two girls and their father have  moved to rural Japan this is so they can be closer to their mother who is recovering from a long-term illness in a nearby hospital.

While exploring the new house the girls discover that they are not alone and that some dust creatures called Susuwatari live in their house too. They are small house spirits which can only be seen moving from light to dark places. The dust spirits look like black soot. It is not long after this that Mei is playing outside and see’s two rabbit like eyes sticking out of the grass. Mei likes to explore so naturally she follows them and falls down a hole in the tree. (Yes that bit is a bit like Alice in Wonderland but that’s where the similarities end)

It is here that Little Mei meets Totoro the keeper of the forest.  Totoro doesn’t speak he just roar’s a lot to express himself. But seen as this tale is about spirits in much the same way Spirited Away is I think it’s OK that he doesn’t speak. The thing about Totoro is that yes he may carry a pink umbrella he is very caring and looks after the girls. He also has a really cool friend called the Catbus. 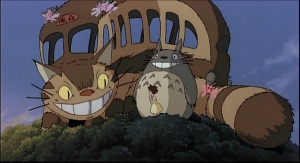 The Catbus can take people any where they want. He’s very fast and he can run down telephone wires.

At the heart of this story is the girls Totoro not only looks after them but for a very long time he is their friend. All the girls really want is for their mother to come home. At this point in the film this is not possible and she has to stay in hospital. Mei finds this really hard and tries to get to the hospital to see her mum taking her a gift that she think will make her better. Mei’s tale is one all kids and adults can relate to. No one wants to see their parents ill to us our parents are super human and never get sick. Or that is a least what we think. Even into adulthood I think this is the case. 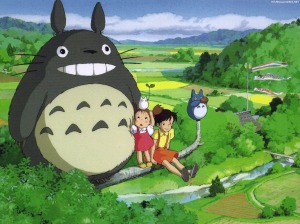 When the family are finally reunited the kids no longer need Totoro, Catbus and the other spirits and the girls can no longer see them but they are always watching over them to make sure they are Ok. I guess one of the reason’s I like this film so much is exactly that, even though things are no longer there it doesn’t mean they can’t still be real. The animation again is wonderful and all though this film is older than Spirited Away  there are elements in this film that carry on in Spirited Away. The dust spirits make it into that film. There is also that element of being a child trying to find  away to make things Ok in their life. The addition of Totoro and friends is really just to look after them which are much the same in Spirited Away with the guardian. This then brings us to the children stepping away from that world as they have fixed what was wrong. The other thing I like about this film is the music. It’s always very simple and fits perfectly with the film. I also like how with some of their films there is a nice little song at the end. Ponyo is another film that has a song at the end.

The other thing to look at with Totoro is that in Japan he is more famous than Mickey Mouse now that is saying something. He even has cameos in other Studio Ghibli films. He pops up in Pom Poko, Kiki’s Delivery Service and Whisper of the Heart to name a few. He also has cameos in a number of Japanese TV shows. Miyazaki also uses Totoro as a part of his Studio Ghibli company logo. He even has a main-belt asteroids named after him. But I think we all knew that Totoro was a big hit when he got his own  Totoro plush and makes an appearance in Pixar’s Toy Story 3.