A Chocobo Is Born

Now I bet your wondering what the hell a Chocobo is. For those of you not in know a Chocobo is a bird that can be ridden in the fantastic game series Final Fantasy.

Fun looking isn’t it? However this is not the reason I am here talking to you. I really just wanted to show you that. Anyway I digress, my reason for being here today is to explain to you why I love the Final Fantasy series and tell you a bit about one of the games. Now this may lead me to tell you about other games in the series and there have been a lot, but I am going to tell you about the very first one I played and the one that holds a special place in my heart.

Back when the Sony Playstation first came out very few games accompanied it on the market one of these was Final Fantasy VII. Now it was a while before I got my hands on a Playstation, my younger brother actually had one before I did. But one wonderful Christmas my mum said she would buy me one as well. Needless to say I was overjoyed, my parents took me to our local electronic shop and let me browse the selves. I looked around and picked one game up to add to my bundle. I was looking for a certain game. A game my friends were playing and I had to have. I was in luck the shop had one left in the basket I picked it up and home I went safe in the knowledge that on Christmas day, no one was going to see me at all.

That happened by the way; I hooked up my new shiny Playstation on Christmas day and lost the rest of school holiday to it. My parents only saw me for meals and when I went to get a snack. So I think at this point I should tell you a little bit about the game. Final Fantasy VII is a role-playing game developed by Square (Now named Square Enix) and it was published by Sony. Now as the number shows this was the seventh game in the series. But was the first released over here with the original six to get re-released in English at a later date. The game first came out in 1997 and has been available on the Playstation on PC and again on the Playstation 3. It was the first game in the series to use 3D graphics. It featured fully rendered characters and pre-rendered backgrounds. The story however follows our protagonist Could Strife, who, at the beginning of the game, joins a rebel group called AVALANCHE on their mission to stop the evil corporation Shinra, which is hell bent on draining the life from the planet in order to make an energy source. As the story goes on Cloud and his friends become involved in a larger threat than they first thought. This comes in the form of Sephiroth. 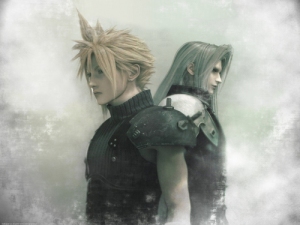 So that’s a brief rundown of the main story. I don’t want to tell you too much as I don’t want to it give away. The graphics at the time this game came out were brilliant as my pervious gaming history had included my Sega Master System and before that my Sinclair Specturm. Yes kids I am that old. But gaming is cool ok. Anyway they were good for the time and that made the game bring a whole new level of awesome. The in game music is fantastic and you can still get the soundtrack today it’s haunting and sad but brilliant to go with the images on screen. But none of these things would have made an ounce of difference had it not been for the story. Without the story and the characters in this game it would not be the big selling hit and Square’s best selling game.

The characters are engaging and you really feel like you know. Especially by the end of disc one when you have to say good bye to one of them and by that I mean they die. Sorry it had to happen in order to drive the story forward. However don’t be too sad there is a guy with a cape and as we all know guys with capes are awesome.

There are also lots of other things in these games to do. There are little mini missions that can take up a lot of the time but are worth it. Along with there are loads of things to collect weapons and magic are to name a few. This is where my friend the Chocobo comes in as you can race them and breed them for fun. Overall this is a brilliant game and will hold you attention for hours as it will take ages just to finish the main game. If you have never played it but are a fan of RPG’s than I suggest you give this a go.

If you have played this then you already know how cool it is and you should go watch the film that carries on after the events of the game. Final Fantasy: Advent Children. It’s a real good way to live with the characters again. Plus it takes the world of FF VII just that one step further. Besides who doesn’t want to see Cloud with his sword again.