Hmsbeefnuts and the Movie of the Month

Hello, a day late, but importantly, still here and ready to read. Geeky Gem chose The Woman In Black yesterday, as All Geek To Me’s Movie of the Month, however, if I’m not mistaken, and I know I’m not, I checked, she chose a runner up last month, so guess what? Yeah, well done. But before we get on to my choice for the best potential movie of February, I thought I’d share some views on last months Movie choice.

Last month I chose The Grey, starring Liam Neeson. I’m happy to say that, last Saturday, I had the privilege of watching said film, and it really was quite spectacular. I won’t review it, but if I may, I will share some thoughts. I have liked Neeson for quite some time, he always seems, to me, the perfect mentor. In films like Kingdom of Heaven, Batman Begins, and Phantom Menace, Neeson was the wise old warrior, teaching the young pup how to handle their bidness (sic). Then one day, Neeson signed on to Taken, and boom, he stopped teaching blokes how to fight, and started punching blokes in the face, with a particular set of skills. Since Taken, he has been brilliant in Unknown, The A-Team, and now The Grey.

The Grey was not quite what I was expecting, and it was much better for it. The trailers very much made the film seem like Wolfpuncher: Punches With Wolves, and although I would have gladly sat through two hours of Liam punching a wolf in the snout, there was a real story here, a story of a man on the edge, even before his plane crashes and wolves attack the survivors. An excellent film, I urge you all to go and see it, easily the best film so far this year.

I also saw Gem’s choice Underworld: Awakening. I saw this in IMAX 3D, and to be fair, I would have enjoyed it just as much in normal 2D, but my local cinema wasn’t showing such a version, and I hate normal 3D. The film was good, at least in line with the other Underworld movies, so if you enjoyed those, this one was equally enjoyable, but sorry Gem, it was no Grey.

Right, on to this month. I do like the look of The Woman in Black. It looks spooky, and as a fan of Hammer Films, I’m looking forward to then continuing their re-birth. However, I’m not going to choose Harry Potter and the Scary Dead Woman, the problem is though, what to pick? Chronicle looks good and has had good buzz, and great reviews, basically the found footage superhero film, if that rocks your boat, it might be the film of the month. Then there are Rampart and Safe House. Both look like good thrillers, both starring good actors, but are they movie of the month material? How about Journey 2: Mysterious Island? Could be the underdog, The Rock and Michael Cain make for a powerful concoction, I will go and see this, I love the Rock. 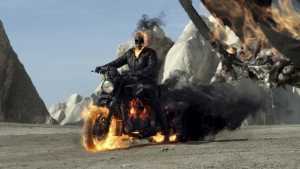 February is looking like a good month, my pick however, is gong to be…. Ghost Rider: Spirit of Vengeance. The guys who made the Crank films, and Nic Cage, let loose to play in the Marvel Playground, with a crazy character, with added Idris Elba? FUCK YEAH! Ghost Rider was not a good film, in fact it was pretty terrible, but I like the look of the sequel, and I’m hoping that crazy Crank guys + Crazy ass Nic Cage = Super Crazy Amazing Nuts Film….of the Month.