Oh The Walking Dead, how much do I love this comic? It is brilliant, now I know there is a television show as well, but in this article, I want to share my thoughts on the comic, and then I will move onto the show at another point in time. Well, The Walking Dead is a monthly black and white comic book series that chronicles the travels of Rick Grimes, his family and the survivors of a zombie apocalypse.

The Walking Dead was first issued in 2003 by publisher Image Comics, the comic was created by Robert Kirkman and artist Tony Moore, who was later replaced by Charlie Adlard.

When Rick Grimes, a Kentucky police officer is shot in the line of duty, he awakes from a coma to a whole new world. The town, in fact the world, has been overrun with walking corpses. When Rick safely exists the hospital, he makes straight for Atlanta in order to find his wife and son. Can you blame him, I am sure anyone of us would have done the same.

In most stories like this Rick wouldn’t find his family for a long time, or in fact not at all. However in this story, he does find find his family, and will stop at nothing to make sure they survive and stay together. On their journey to find somewhere safe to live, they encounter a number of other survivors, they form a group as each person they meet seems to have something they need. As the group grows you can imaging not all of them make it, with characters’ frequently being killed off in some rather gruesome ways. They don’t all get killed by zombies, which is a welcome change, as a zombie induced death would get on your nerves after a while.

Robert Kirkman has written some amazing characters into this fantastic piece of work. There is of course Rick, who I mentioned was a police officer, there is Glenn a boy he meets in Atlanta and is the go getter of the group, Dale who’s kind of the father figure but is also pretty handy with a gun and my favorite character is Michonne, she is fantastic. Her entrance scene is brilliant she walks in with two zombies in tow and a big sword. 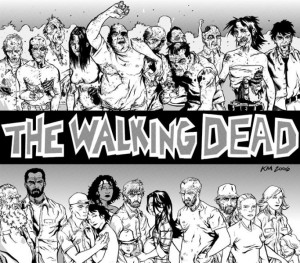 Now besides the characters I have mentioned above, there are a whole lot more but I don’t want to mention some of them as they give away big plots and will ruin the story if you haven’t read them. Instead I will tell you a little more about the art work, Tony Moore did a brilliant job on the first 7 issues of this comic and he continued to do the cover art right up to issue 24, now the sad thing about this is that Kirkman and Moore are no longer speaking, and are currently going to court over the matter of the comic. This however sad it is, cannot over shadow what is a brilliantly illustrated piece of work. Adlard was more than a capable artist to take over from Moore and I have had the joy of seeing him in person at a Comic Expo I attended last year with Kirkie Chick and BlitzEvo. He was really good, and the panel he was on was really fun, and he was excited by his work and even appears in the first season of the show as a zombie. Anyway his work is brilliant it’s amazing what he can do with black and white.

If you are fans of the show but have yet to read these fantastic comics, you really should, you are missing out. If you have read this and are watching the show then you might want to check out the new novel called Rise of the Governor, which gives a much more detailed pre story to one of the most evil villains in comic history. If you have done all this, then I have no more to teach you, and I hope you continue to enjoy The Walking Dead as much as I do.