My Love of Books

I am an avid reader, it is in fact hard not to find me with a least one book on the go. There are few joys in life better than having my nose buried in a book, and I can spend hours, just me, some music, a cup of coffee and a good book. Now even thorough I have an e-reader, there is nothing like the smell of a new book and feel of a page in my hand. My mum used to read me bed time stories and always encouraged me to read. She would take me to the library at least once a week to pick up some books. I usually always picked the number that maxed out my card and I read every single one. It was and still is, one of my favourite pass times. This got me to thinking, what have been the books I have loved the most over my 28 years, I thought I would share them with you.

My child hood books were books I read over and over again and were mostly Roald Dahl and Goosebumps.

My favourite Roald Dahl book was The B.F.G. 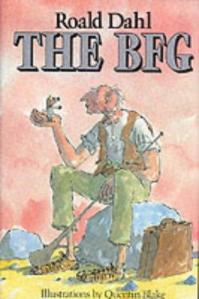 I must have read this book easily about twenty times. It wasn’t just about the fact the main character was a giant, it was the story, there was something there that was just magical to me. Sophie decides that she wants to know what The B.F.G is doing one night, when see spots him at her window, little does she know that not all giants are like The B.F.G, some of them are not nice at all. Dahl had this way that always made me want more. I think that’s why I have read all his books and when I think back to the first books I read alone, he is the author I can think of.

When I got a little older, but not yet in my teens I wanted to read books that were a little bit more grown up, and so I turned to R.L Stine and his stories from the Goosebumps series. The one I liked the most here was called The Girl Who Cried Monster.

I think the reason I liked the Goosebumps books, was I knew my little brother would never ask me to read them to him, because at the time he found them too scary. After a few years I actually gave him my books as he wanted to read them, I am not sure he ever did. The Girl Who Cried Monster was about a girl called Lucy Dark, who is spending her summer holiday scaring her brother and participating in the local library’s reading program. She scares her brother Randy by merely mentioning that there might be a monster behind a tree, in a bush, around the corner, etc. Randy falls for this because he is six years old, but will anyone believe when she finds a real monster. This was just one of the many books I spent my nights with, reading under the covers with my torch.

By the time I hit my teenage years my tastes had changed and I wanted something more. I wanted adventure, for the stories to be more dangerous and full of peril. I wanted monsters and dragons and a whole lot more. So it was about this time that The Hobbit came into my life.

At first I was unsure of The Hobbit, mainly because I was set this book in High School as my English book for that term, and seeing as it was a school book, I didn’t want to read it. The second I read the first page I was hooked. I couldn’t put the book down, I even read more than we meant to and finished it before the rest of the class. This prompted them to call me swot, but I couldn’t help it. The book was fantastic and had everything I wanted in it, Dragon’s included. It was the curious tale of Bilbo Baggins and how a simple adventure would bringing meaning to a life that was quiet. Plus it had a wizard which is always good. As you can imagine I am very excited for the film and may re-visit this book in the coming months.

Another book I read near the end of my teens was not a book that may make its way into your normal reading list. This book will stay with me forever, A Child Called It.

Just how I got my hands on this book I can’t  quite remember. It tells the true story of the author Dave Plezer and how his child hood was tormented by the one person who’s duty in the world is to look after you, His mother. She was a nasty woman, who used to do some of cruellest things I have ever heard of to her child. She stopped calling him by his name; she held his arm over the flame of a cooker. Along with many other things, however, I managed to read this book and for the first time in my life went and gave it to my mum and said you have to read this, with a tear in my eye. My mum did in fact read it and the day she finished it she came to my room and hugged me and that was all she did. She then passed it on to my dad who isn’t a big reader, and even he managed to read it, even if he did put it down a few times saying it was too much. Just so you know, Dave did get away from his mother and wrote two more books about his life. I felt so strongly about this book that I bought it for Kirkie Chick not long after we became friends.

In my twenties I seem to have moved far away from Roald Dahl but not too far from J.R.R Tolkien, I would say my tastes have evolved but not changed completely. I have read so many books it’s hard to pick just two from my twenties as I am still in my twenties, plus I read fifty-three books last year alone. That works out roughly one a week for the year, and I wonder why I need reading glasses.

Kirkie Chick and I share a love for books and will often tell each other about books we read and think the other may like. For example, I suggested she read The Hunger Games and she is, she suggested a book to me that will stay with me and always make me think of her. The Lovely Bones, a strange book to think of when you think of a friend. However it holds a memory for me that will never leave me. 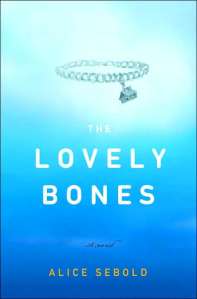 Now The Lovely Bones was written by Alice Sebold and tells the tale of a young girl called Susie Salmon who, after being raped and murdered, watches from her personal Heaven as her family and friends struggle to move on with their lives, whilst she comes to terms with her own death. I know I picked another depressing book to tell you about. There was just something about the idea of watching over your family after your gone that spoke to me and I am not sure why. Sebold herself was raped and she tells you all about how this happened to her and how she got on with her life in her book Lucky.  You read this book and you see what happens to Susie’s family and you wait for Susie to realize that they are going to be OK, and that she doesn’t have to worry. It’s a fantastic book and the film isn’t bad either.

My last book for you, for now at least, is a book a friend told me to me read a few years back, and a book which brought the world of fantasy crashing back in to my life. Now a major show on HBO/Sky Atlantic I am of course talking about A Game of Thrones.

As with a few of my favourite books, this is part of a series, and I was a little late to the party on this one. I was stuck for something to read and so took to twitter and asked if any one had any ideas, it was there that an old colleague suggested A Game of Thrones by George R.R Martin, I know another author with R.R. in his name. Wait maybe you need the R.R.  to be a great fantasy writer? Hmm, sorry where was I? Ah yes, A Game of Thrones. After the suggestion was made I got my hands on a copy and was very aware that filming for the show had already started so I was on a clock to finish this epically huge book, this first in the series of A Song of Ice and Fire.

Again, I picked it up, and within in minutes I was hooked, every waking spare second I had I went straight to Westeros to see how Eddard Stark and his family were doing in the battle for the Iron Throne, plus I wanted to know if Khal Drogo had killed anyone while I was away from the page. I raced through the book and took everything in finishing just days before the show started, I am now doing the same with A Clash of Kings, I know I have had a whole year to read but as I said at the start I read fifty-three books last year, I just didn’t get to this one. I am hurrying I promise. The world of the Seven Kingdoms is so rich and in depth, you feel for the characters, well some of them any way. You laugh at others and fear many, you want to know what the White Walkers are and what will happen when winter has arrived. If you like these types of books and have not yet read this, you have to, it’s brilliant and it builds nicely, but leaves you wanting more.

That is where I must leave you now as Westeros is already calling my name and I only have until April 2nd to finish this book. I know there are loads of other books in my life I could have told you about, but I didn’t have time, plus I thought it would be OK to leave out Harry Potter, as he is currently in my run of Page vs. Picture, and I touched upon Hunger Games in the Movie of the Month. I must bid you farewell and happy reading. I am off to stick someone with pointy end of my sword.

3 thoughts on “My Love of Books”