Now I don’t need to tell you how much I love cartoons, I think from articles I have written here, and of course, if you know me, then it is fairly evident that I love cartoons. Most of the cartoons I love are the ones I grew up with as a child, this includes the one I am here to share some trivia about. Transformers was the love of my life, with a number of other cartoons, for the best part of my child hood, here are some things you may ,or may not have known, about those robots in disguise. 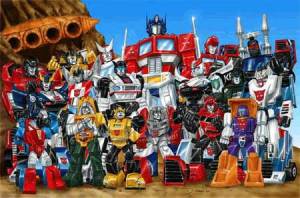 The first ever Transformer to appear in the series is Wheeljack.

Peter Cullen, voice of Opitmus Prime, based the voice on John Wayne.

Cliffjumper was originally going to be named “Blow-Out”, due to his tendency to suffer from blown tires.

Ted Schwartz was originally to be the voice for Hot Rod/Rodimus Prime for the post movie episodes.

Omega Supreme was originally going to be called “Fortress Maximus”. Although his name was changed, the name Fortress Maximus is later given to a character who first appears in the series-ending.

Voice director Wally Burr occasionally filled in for voice actors that were unavailable for a given episode. For example, he provides Thundercracker’s voice in The Transformers: War Dawn.

Optimus Prime was never intended to return to the series after the movie, but a public outcry (which surprised the producers) resulted in him returning.

Skyfire is the only Transformer in the series who changed his alliance.

Alpha Trion is the only Transformer in the series who aged since the beginning of the war between Autobots and Decepticons till the present time.

Starscream was originally called Ulchtar, according to comic writer ‘Bob Budiansky’, the “grandfather” of Transformers. He is not sure how the name was spelled exactly, though.

I could go on and on with trivia about this fantastic cartoon, but as I am in the geek cave I can already hear Mr Beefnuts telling me to stop and move on, so join me next week for something new.