Now some of you may remember that a few weeks ago Hmsbeefnuts told you about his love for the show Finding Bigfoot, I have also told you about shows I like, such as Man v Food and The Walking Dead. While Beefnuts was telling you about Finding Bigfoot he mentioned a show that I like a lot. Its called Ice Road Truckers so here, I am going to tell you bit more about it.

Ice Road Truckers (which is often initialized as IRT) is a documentry-style reality show that premiered on History in 2007. It features the activities of drivers who operate trucks on seasonal routes crossing frozen lakes and rivers in remote artic territories in Canada and  Alaska as well as Alaska’s improved but still remote Dalton Highway. So far it has run for 5 season’s with speical runs in other parts of the world.

In 2000, History aired a 46-minute episode titled “Ice Road Truckers” as part of the Suicide Missions series. This was based on the book Denison’s Ice Road by Edith Iglauer, the episode detailed the treacherous job of driving trucks over frozen lakes, also known as ice roads, in Canada.

After 2000, reruns of the documentary were aired as an episode of the series Modern Marvels instead. Under this banner, the Ice Road Truckers show garnered very good ratings. However it wasnt until 2006, The History Channel hired Thom Beers, owner of Original Productions and executive producer of Deadliest Catch, to create a series based on the Ice Road book. Shot in  HD (although the season ended before History HD was launched in the US), the show “charts two months in the lives of six extraordinary men who haul vital supplies to diamond mines and other remote locations over frozen lakes that double as roads”.

Now the cast of the show has changed a few times over the years to bring in new drivers and give old ones a break. So far in its 5 season run IRT has had the following cast Hugh Rowland, Alex Debogorski, Lisa Kelly, Jack Jesse, Tim Freeman, George Spears, Rick Yemm, Dave Reamon, Tim Molesky and Mia Sieber these truckers are joined by a number of other truckers and workers up in Alaska and Canada.

The reason I like this show is the danger that is involed in crossing these Ice Roads in order to supply the out of reach villages with everything they need for the rest of the year before the ice roads melt again and they are cut off. One of my favourties in the show is Hugh as he doesnt care what he has to do to get the job done. Which see’s him get into a lot of trouble, this Show can always be funny. 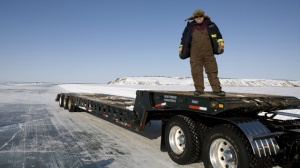 I really like this show, I know it might sound dull watching someone truck up and down the same road for 13 epiosdes or so but what happens to these truckers is what the show is all about. Yes they sometimes crash in to a snow dift and have to get help, yes they make mistakes. Thats all part of what happens to them in a short space of time, that they have in order to their job. If you haven’t seen the show, I would highly reconmend it.