12 Movies of Christmas: How The Grinch Stole Christmas

Hiya all! Another week gone by, and here I am again. Today I thought I would pick up with Number 2 of my 4 Favorite Christmas Movies. You may have noticed that HMS, Gems and I are sort of doing a running thing with this. What can I say, we all love this time of year (Ba Humbug to you Scrooges out there =P ) and especially the awesome movies that feature it, and what better way to share our Christmas spirit that with movies? Anyway, my second pick is Dr. Seuss’ How The Grinch Stole Christmas – the Jim Carrey version, not the cartoon one; although it is fairly entertaining as well. =) 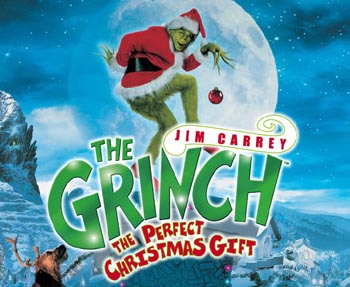 Dr. Seuss’ How The Grinch Stole Christmas, promotionally (and more commonly) known simply as The Grinch, was produced in 2000 by Imagine Entertainment, and released by Universal Pictures. It is a holiday fantasy-comedy film based on the 1953 book of the same name and the 1966 television cartoon special of the same name, written by the famous Dr. Seuss. It was the first Dr. Seuss book the be adapted into a full-length feature film (to be followed by The Cat In The Hat from 2003, Horton Hears a Who from 2008 and The Lorax from 2012) Since the movie is based on a children’s picture book, many additions were made to the storyline to bring it up the feature length, including quite a bit of the back story about the Grinch. Most of the rhymes from the book were used in the film, though some were changed a tad bit, plus some new rhymes penned especially for the movie. This movie has a runtime of a mere 104 minutes.

This movie manages to be both hilarious and heartwarming all at once. Jim Carrey is a comedic genius, and that amazing skill translates well even through a giant green furred creature. Certainly it seems as though the role of the Grinch was hand tailored to suit him by the amazing Dr. Seuss himself. This movie is hilarious. It has me in stitches every single time I watch it. The rhymes are just fantastic, and the pace of the movie flows really well. I’m not usually a comedy sort of girl, but this movie definitely makes the list.

The Grinch follows a cantankerous, grumpy green creature known as the Grinch. The Grinch lives atop a perilous mountain near the festive city of Whoville, where it happens to be Christmastime. All the Whos of Whoville love Christmas, while the Grinch despises it. Down in Whoville an 8 year old girl named Cindy Lou Who has begun to think that people have lost sight of what is important on Christmas. After learning about the existence of the Grinch, she begins to take an interest in his lonely state of affairs and learns his sad history. Determined to show the Grinch the true meaning of Christmas, she invites him to participate in the city celebration known as the Whobilation. When it goes awry, the Grinch goes on a rampage. While satisfied with his path of destruction at first, he quickly realizes he has not crushed the spirit of the holiday and goes back to his mountain in a pique. In a mad attempt to cease the celebration of the detested holiday he hatches a sinister plan: to steal Christmas from all of Whoville!

There we go; my second favorite Christmas movie. While it might not be everyone’s cup of tea I certainly love this movie. It has entertained me since I was a child, and continues to entertain me to this day. I hope you enjoyed reading about it. Now I am going to be off to enjoy watching it.

Until next time, Happy Holidays;