12 Movies of Christmas: Look to the Sky

I know today marks the release of what I am hopping to be an awesome movie, yes folks today is Hobbit Day. No I was going to write about the Hobbit today but seen as I wrote about it back on movie of the month I think I have said all I need to say. So today I shall be taking you through a list of other creatures I think could pull Santa’s slay.

Pegasus – Clash of the Titans 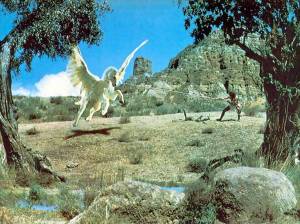 I think Pegasus is awesome and would look great helping Santa on his busiest day of the year. How cool would this look, alright it may not be able to land on your roof but it would look amazing.

Toothless – How To Train Your Dragon

Did you really think I would miss a dragon off this list. Of course I went for one of the nicer ones, Toothless can be trained but Santa would need Hiccup in order to help him fly. However who cares it’s a freaking dragon.

Flying Monkeys – The Wizard of  Oz

Now I am unsure how useful a flying monkey would actually be but I thought Santa could always give it a go. I mean he could get them to pull the slay at least, he would just have to keep them out of sight as they look a bit scary.

Now Beaky is one the most beautiful creatures on this list, but he is also really cool. Buckbeak could totally help Santa and would get all his delivery done in record time I bet. Only problem is you would hae to leave a dead ferret out for him instead of a carrot.

I know Thestrals are not the most good-looking of creatures and yes it is another Harry Potter animal but I think they would do an awesome job of helping Santa. Plus you wouldn’t be able to see them.

Well there we have just some of the creatures I think could hep Santa come the 24th of December.