Between the time when the oceans drank Atlantis, and the rise of the sons of Aryas, there was an age undreamed of. And unto this, HMS Beefnuts, destined to wear the jeweled crown of Aquilonia upon a troubled brow. It is I, his chronicler, who alone can tell thee of his saga. Let me tell you of the days of high adventure…

HMS Beefnuts has been a geek since before he can remember. Raised on a diet of Indiana Jones, Ray Harryhausen, Hammer Horror and monster movies he soon realised that the geek way, was the right way. Experiencing all the usual childhood pursuits, he chose Transformers, Ninja Turtles and Nintendo over football, but still had a healthy respect for the World Wrestling Federation. Choosing Ancient History as a degree subject, thanks mainly to his love of Jason and the Argonauts, he indulged his love of ancient warfare, and unrelated got very into Comic books. Usually found at the local cinema, or on x box live, HMS Beefnuts loves quite a lot of geekery. His favourite film is Jaws, or Raiders of the Lost Ark, his favourite character Batman, or Conan, and his favourite game is Oblivion or Mario. He has trouble making firm choices…

Hello there, my name is Geeky Gem. I was born at a time when DeLoreans were time machines, you couldn’t feed your pets after midnight but you always knew who to call. This lead me in my long and endless journey with film. I have seen so many films I have lost count.

So come with me if you want to live and we’ll punch it to 88mph. Thorough the bog of eternal stench and beyond the stars. Before we loop around Tatoonie and land in Middle Earth. And all this before we head in to the forbidden forest to hunt the Jabberwocky.

Well that’s not quite how this will go but didn’t it sound awesome. However if you liked that then how about you just join me in my love for films and all things fantastic. And we might just learn a thing or too. Hope fully it will be how to clone a dinosaur because that would be cool. 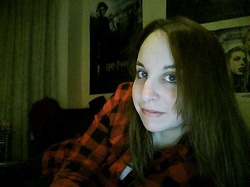 A child of the 1980s. Interested in all things Sci-Fi and geeky. I am English (for my sins) but I have made Wales my home. My guilty pleasure is Doctor Who, classic and new. I love to read anything from fantasy through to romance. (I know soppy isn’t it?)

I watch lots of films and I enjoy the really obscure films that others may not have heard of, Velvet Goldmine and Breakfast on Pluto anyone?

I would love to be whisked away in the TARDIS by the Doctor, but I’m more likely to be travelling on the Cardiff Bay train.

I have a voice and I want it to be heard about all things film, television and books, so come join me on my rambling thoughts.

Hiya all, Caelrona here. As a child of the 90’s I’m the youngest here at All Geek To Me. Fortunately my siblings of the 80’s were the ones to introduce me to the world, so instead of being raised on Blue Clues and SpongeBob I got my entertainment from The Gargoyles and ThunderCats, with a healthy dose of Pokémon and other anime thrown in for flavor. I learned at an early age that I was uninterested in the pursuits of leisure favored by most of my friends, and thus began my exploration of the Geek universe.

I am American by birth, and hoping to make Wales my home. I speak two languages fluently – English and American English. My interests really span the geeky divides, as I love a great many things; such as reading, gaming, drawing, anime, cooking, and sleeping. Specifically I like Harry Potter, Legend of Zelda, World of Warcraft, Steampunk, Conventions, Studio Ghibli, Dr. Who, Cats, and too many other things to list! =) All in all I am pretty much what you’d expect from your average American geek.  If I’m not gaming, odds are that I’m watching something or reading something. I really enjoy losing myself in what I’m reading, watching or playing; other Universes are just so amazing to explore, ya know? But anyway, this Bio has gone on long enough; I’ve got zombies to kill, or dragons to slay.. ooh the possibilities! Caelrona Out!< 3

4 thoughts on “Meet The Geeks”