Archive for the tag “10 Things I Hate About You”

Hiya all! Caelrona here; you might have noticed my, uh, lack of a blog post last week. Sorry about that. I missed my day, and to make matters worse I don’t even have a legitimate excuse. I had one all typed up, and ready Tuesday morning, and decided to have a catnap before putting pictures to words. When I woke up.. BAM! it was nearly mid-day Wednesday! I lost an entire day to sleep. Not that I’m particularly complaining; I do love sleep, but now I feel bad. Anyway, there are tons of things I want to blog about; I mean, The Walking Dead just started back up, and there is a new show coming on March 3rd that I am super excited about. However, since Valentines’ Day was this past Thursday, I’m going to save my excitement about The Walking Dead. Valentines’ Day only happens one time in a year; so I figure I ought to blog about it whilst the blogging is good (er, relevant, Hehe.) So in honor of Valentines’ Day, I thought I’d share some of my favorite chick flicks. I do watch them occasionally, and even though I spent my Valentines’ Day with my friend Annie in a theater filled with dudes watching A Good Day To Die Hard, chick flicks are more.. uh, lovey, and thus more suited to a Valentines’ blog. 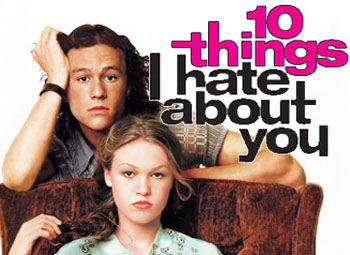 10 Things I Hate About You

10 Things I Hate About You was made in 1999, and released by Touchstone Pictures. It is an American teen romantic comedy with a runtime of 99 minutes. The film is a modernization of Shakespeare’s ‘Taming of the Shrew’, and is titled after a poem written by the film’s female lead about her bittersweet romance with the male lead. The film follows two teenage couples. Cameron, a new kid at school, wants to date Bianca. Unfortunately she cannot date unless her older, non-conformist shrew of a sister Kat does. Being broke, Cameron tricks popular jerk Joey into paying bad boy Patrick into dating Kat. What can I say? I’m a child of the 90’s. Plus, Heath Ledger looks pretty damn good in this, so that does influence me a little bit. This is one of my favorite chick flicks. I mean, how could it not be? It’s a modern day Taming of the Shrew (yay, Shakespeare!) I prefer the aspects of the movie having to deal with Kat and Patrick (Julia Styles and Heath Ledger) rather than Bianca and Cameron (Larisa Oleynik and Joseph Gordon-Levitt). I’m guessing that is probably because I identify more with those characters, but whatever. 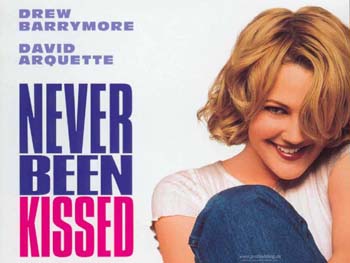 Never Been Kissed was made in 1999 by 20th Century Fox, in conjunction with Flower Films and Bushwood Pictues, and was released by 20th Century Fox. It is a romantic comedy, with a runtime of 107 minutes. It follows Josie, a copy editor desperate to make reporter, as she goes undercover to get the scoop on the high-school scene. A ridiculed nerd when she was in high school, she starts off pretty bad until her drop-out, but cool, brother enrolls undercover to help her out, giving her an over-night popularity makeover. Both siblings find love and joys of youth again, but in Josie’s case it is sensitive bachelor teacher Sam Coulson. As the publication deadline and prom approach, the price of blowing their cover rises; and it seems ever more daunting, yet inevitable unless she sacrifices her career for love. I think this one is probably on most girls’ chick flick lists. At least, it is if they are my age. I love Drew Barrymore in everything I’ve ever seen her in, and while parts of this movie are too ridiculous for words (Oh Gawd, the Barbie outfits,) parts of it are really sweet. I particularly like the dress Josie wears to the prom (er, her second prom, I mean.) I’m not really a chick flick type of girl, but this movie I’ll watch just because it’s on, even if I’m not in the mood for a chick flick. It’s just a good movie.

Simply Irresistible was made in 1999 by Regency Enterprises and was released by 20th Century Fox. It is a romantic comedy with a runtime of 96 minutes. Simply Irresistible is about a young woman who inherits her mother’s restaurant, but not her ability to cook. After a shopping trip, she begins to develop the magical ability to influence people’s emotions through her cooking, which is also much improved. Her love interest, a no-nonsense businessman, tries to resist falling in love with her after discovering her powers. I’m not actually certain why I like this movie. I’ve only seen it a handful of times, but every time I watch it, it doesn’t seem to slide off my list of chick flicks. There’s just something about it. I’m not a big fan of either lead actor (although I like Sean Patrick Flanery in The Boondock Saints,) and I wasn’t old enough when this came out to really identify with the characters, so I’m at a loss as to why I like it. I think it might be the idea of magic through cooking… not that I’d use such powers if I had them or anything <.<; No No.

Miss Congeniality was made in 2000 by Castle Rock Entertainment in conjunction with Village Roadshow Pictures, NPV Entertainment, and Fortis Films, and was released by Warner Bros Pictures. It is an American police comedy, and has a runtime of 109 minutes. Miss Congeniality is about a tough, tomboy FBI agent named Gracie Hart, who is forced to go undercover – as a girly contestant in the Miss America beauty pageant. Aided by master stylist Victor Melling, she must get in touch with her femininity to keep her cover while working with her love interest and fellow FBI agent Eric Mathews to catch a criminal who is planning on blowing up the Miss America pageant. I love this movie. I also really like Sandra Bullock, so it isn’t really a surprise that I’d love a movie where she plays a tom-boy FBI agent. I can even forgive her for getting in touch with her inner femininity, because she pulls it off well, and with humor.

Ever After: A Cinderella Story

Ever After was made in 1998 by Flower Films, and was released by 20th Century Fox. It is a historical romance based upon the fairy tale of Cinderella, and has a runtime of 121 minutes. Ever After follows the story of a common girl, Danielle de Barbarac, who is treated like a slave by her aristocratic stepmother as she overcomes all odds to become a princess. Yet another Drew Barrymore film; what can I say? I like this movie because it takes all of the magic out of the picture. Magic is all well and good, but watching Cinderella get the prince under her own power is a nice change. Plus, in the end she rescues herself. It’s a very strong picture of womanly independence and strength, while still remaining a romance. 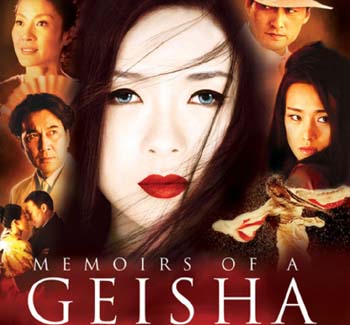 Memoirs of a Geisha

Memoirs of a Geisha was made in 2005 by Spyglass Entertainment in conjunction with Amblin Entertainment, and Red Wagon Productions; and was released by Columbia Pictures and DreamWorks. It is a film adaptation of the novel by the same name, and is a historical romance with a runtime of 145 minutes. Memoirs of a Geisha follows the story of an impoverished nine-year-old, named Chiyo, from a fishing village as she is sold to a geisha house in Kyoto’s Gion district and subjected to cruel treatment from the owners and the head geisha Hatsumomo. Her stunning beauty attracts the vindictive jealousy of Hatsumomo, until she is rescued by and taken under the wing of Hatsumomo’s bitter rival, Mameha. Under Mameha’s mentorship, Chiyo becomes the geisha named Sayuri, trained in all the artistic and social skills a geisha must master in order to survive in her society. As a renowned geisha she enters a society of wealth, privilege, and political intrigue. Memoirs of a Geisha has stunning visuals. I cannot say enough about how absolutely gorgeous some of the scenes are in this movie. The story is intriguing and very interesting, with enough romance to really sell as a chick flick. I don’t watch this movie often, but I still love it.

Well, there you have it. My top… er, 6… My Top 5 (and a bonus!) Chick Flicks. We’ll go with that, even though the real reason is because I apparently fail at counting. Oh well, hehe. I also just noticed that half of them were made in 1999. Apparently that was a great year for chick flicks or something, or maybe it’s just that movies made in that year were being shown frequently on television when I was a teenager. Either way, way to go 1999. All of these movies are entertaining in their own ways, and they are really great if you’re feeling in a chick flick mood. Speaking of, all this blogging about them has kind of gotten me in the mood for a chick flick, so I think I shall be off to watch one!