Archive for the tag “america”

Hiya all! Caelrona here with another dose of Wednesday Whimsy. This week I actually have some stuff to write about for all of you. It isn’t geeky per-se (although I am making fun of people) but it’s pretty funny, so it should count as whimsical =) I’m not going to talk about geeky goings-ons in my life, because it is just as eventless and boring as it was last week – but about things going on here in my home country of America. Now you might be asking yourself, what could be so interesting in America that I would write a blog post about it? Sports? Nope, not interested in the world of sports even if it is Football season here (For those of you who are not familiar with American Football, it is sort of like Rugby for pussies wearing Kevlar armor with a bunch of rules and regulations that take away all the blood – I mean fun.) Politics maybe? Excuse my language, but hell no. What then, could be so interesting? Stupidity. If there is one thing Americans excel at, it is making absolute fools of themselves, usually over the most amazingly silly things. Most recently it has been over food, which I thought was kind of funny. As a geek I have my favorite gamer snacks, and I’m sure you do too. But I certainly am not going to rage or pay out the nose to get them. Anyway it’s always fun to laugh at stupidity together, so I thought I’d share it with you so that you can laugh at it with me. 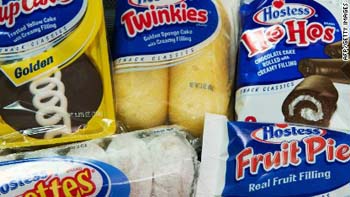 Hostess is going out of business. The maker of spongy, sugary, sinfully delicious and fattening snack cakes and pastries is closing. If you don’t know who Hostess is, I’ll wait while you go google it. Try searching the words Twinkie, Zebra Cakes, Snowballs, Ho-Hos, DingDongs and Zingers. Or you could check out the movie Zombieland. One of the main themes in the movie is Tallahassee trying to get his hands on a Twinkie. But why is this big news? Why is this even news at all?! I have no idea, but it is making headlines all across America. I guess people love their snack cakes a little more than I do. Whatever the reasons, people have been going nuts ever since the headlines were posted. Stores have been ransacked of anything with a Hostess label and people have begun posting boxes of the pastries and cakes online (try an ebay search, I dare you) for ridiculous prices. Even worse? People are buying them! When I looked them up on ebay, someone was selling 5 boxes for $80. That is ridiculous profit, because those boxes only cost like $2 at the store. Perhaps the absolute worst thing? People are buying them. Just for shits and giggles I watched that very same auction end – someone bought them. For $80 freakin’ dollars! That’s the price of two used video games right there, or a new one plus a little spare cash. Maybe it’s the geek in me – or it might be because I’ve never been overly fond of Twinkies – but personally I’d rather have the money than the snack cakes. 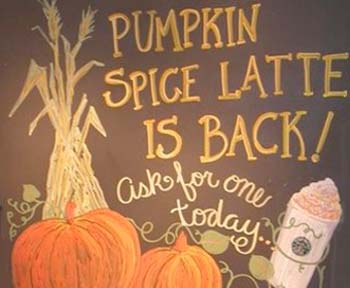 Among other stupid American news is yet another case of what I can only describe as ‘Holy shit, my country is filled with fuckin’ idiots.’ A very popular (overpriced, douchbaggy, ‘cool’, hipster, with mediocre drinks) coffee house franchise has been running out of one of their seasonal drinks very regularly and very quickly, much to the intense displeasure (*cough* profanity screaming anger *cough*) of their customers. It has gotten so bad that it made the national news headlines. Starbucks did so much promotion on the Pumpkin Spice Latte drink (which, I’ll admit is fairly tasty) that they can’t keep their stores stocked with the stuff to make it. They’ve been selling out the same day they get the stuff in – even the powdered instant stuff they sell which normally ends up in the discount bin after New Years has been flying off their shelves – and yet again onto ebay listings. I don’t know what it is, but when people can’t get their junk food (or drink) craving, they will spend crazy amounts of money on that stuff. Tins of the powdered instant stuff are selling on ebay for $20 a pop, when they can be bought at the stores for only $7. Not only that but people are listing recipes on how to make same-tasting Pumpkin Spice Lattes at home. Holy Toledo, people are actually paying for a recipe! The only possible explanation for all of this crap? 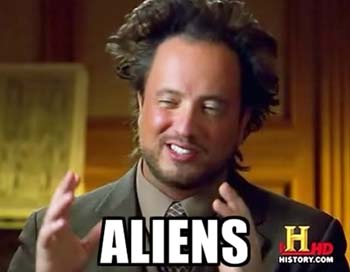 I guess it could just be that people are insane. Or stupid; whichever. 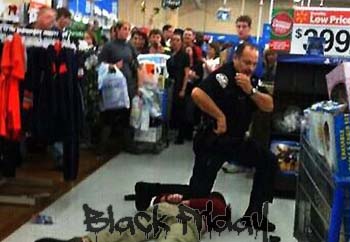 Anyway, on a different note of insanity it is November now. I don’t know what that means for other countries, but in America this means two things; Thanksgiving and Black Friday. Nothing really too geeky there, but some fun is to be had anyway. Thanksgiving is all well and good I guess, but I’m most excited about Black Friday. Not because I’m going to be going shopping – but because I’m going to watch the madness on television. Every year it gets better and better. Riots, beatings and all sorts of crazy things go down. According to statistics about 20 people die every year on Black Friday trying to shop. This shit is insane. What should be just a fairly busy shopping day turns into the most wickedly awesome fights and riots ever. Seriously, this is one day of the year that the news is guaranteed to be worth watching. Fights start on Black Friday that put professional pit fighters to shame.

Well, anyway that is what is going on here in America. People are being stupid, and someone somewhere is going to die trying to buy some pajamas. Ahh stupidity – it’s always entertaining! Anyway, I’ve got some more madness to watch so I’ll talk to you next week! 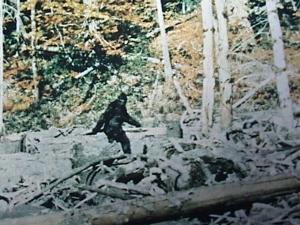 Happy Sunday to all. I am in a very good mood today as I have managed to convince Geeky Gem that she is much better at Trivia than I am, and that she should do it every week. I also demanded that I was allowed to write my last trivia articles, for the time being, on any subject that I want. She has agreed, and so in the first of my last two weeks on the job as trivia giver of the week, I shall be giving you, dear reader, 10 facts on one of my favourite subjects, Bigfoot, or Sasquatch if you prefer. Now, I don’t know if Bigfoots exist, I would really love them too. But there is enough weird stuff going on in the woods that it bares a closer look.

I have never seen one, but then I live in Wales, and Bigfoot doesn’t often venture across the pond. Here in Wales, we don’t have many big hairy hominids, apart from on the rugby pitches up and down the nation, we have ABC’s (Alien Big Cats), and the odd reports of flying snakes! I have never seen either of these cryptids either, especially winged snakes (I wonder why), but my fascination for cryptozoology continues, for proof see this, and this. Whatever your views, Bigfoot is cool, or at least the idea of Bigfoot is cool. Now I can’t very well give you 10 Bigfoot facts, as facts in this case, can not be determined. I shall however give you 10 famous encounters with the Big Hairy one throughout the ages. 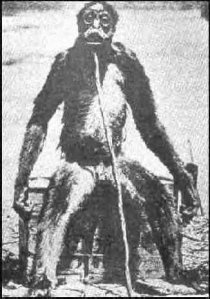 In 1884 in British Columbia, a crew of railway workers claims to have seen an ‘ape man’ during the summer, walking near the tracks. The workers forced it into a carriage, and held the ape man in a jail cell for several days, feeding it berries. They named their captive Jacko. 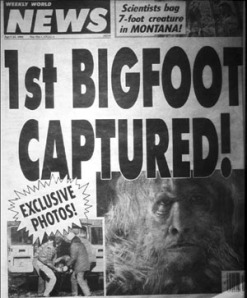 Imagine getting kidnapped by Bigfoot! Well in 1924 a lumberjack called Albert Ostman, woke up whilst being carried away in his sleeping bag. After a few hours, Ostman was put down and found himself in the lair of a family of Bigfoots. It seems the adult male had carried him there. They didn’t hurt him, but wouldn’t let him leave. He escaped by feeding the big Sasquatch a can of snuff. 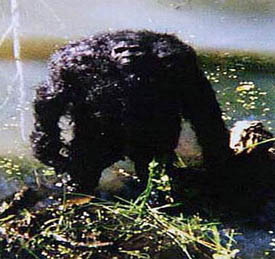 Also in 1924, Fred Beck and four other Gold miners claimed that their cabin in Mount St, Helens was put under attack by a number of ‘ape men’ who threw rocks and tried to get in to the cabin. The men grabbed their rifles and shot one of them, although the body fell off a cliff. 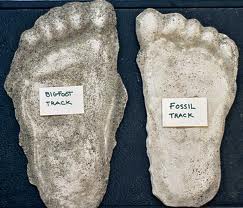 In the summer of 1958, Jerry Crew, a tractor operator at Bluff Creek noticed giant footprints all over the construction site. He cast the
footprints and sent them to a local news reporter. They dubbed the creature Bigfoot, and a legend was born. 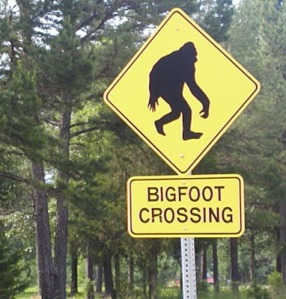 Reports from Honey Island in Louisiana’s swamp land describe a monster that lives there. It is known as the Louisiana Wookie, because it looks like Chewbacca. 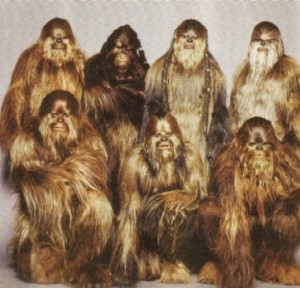 In 1976 Virgil Larson, an outdoors-man and hiker encountered a Bigfoot who he thought was a park ranger. He shouted a greeting and was shocked when the Big man just stared back at him. Larson left sharpish.

This next one is straight out of the X – Files. Apparently a rancher shot a Bigfoot in Big Sky County. The dead body was confiscated by the FBI. Seems like bollocks to me.

In 2008 a Bigfoot hoax was perpetrated on the world press by Rick Dyer and Mark Whitton. They claimed they had a dead Bigfoot, which they kept in a freezer. It turned out to be a costume, and the two claimed it was all a big joke. 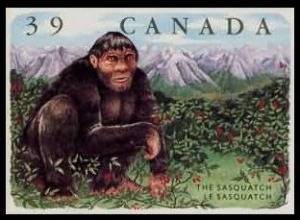 Bigfoot has even made it to the Whitehouse. In 1892, President Roosevelt wrote a book called The Wilderness Hunter. In the book a man named Bauman and his partner are camping along Montana’s Wisdom River. In the night they are disturbed by an ‘ape man’. They fire their gun at the creature who runs off. The next day, Bauman woke up, but his friend didn’t, he was found with his neck snapped and teeth marks on his throat. Bauman ran off, gun in hand, it was the creature who was responsible.

1967, Patterson and Gimlin capture the best video footage of Bigfoot ever. In broad daylight, the two men filmed a large female Bigfoot across a sandbar. The film is the best evidence yet for Bigfoot’s existence, but is very controversial. 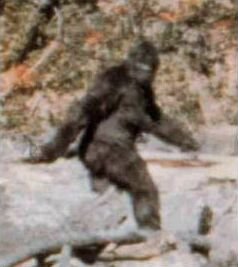