Archive for the tag “forza horizon”

Hello. Welcome to another Monday full of my musings. This blog is a bit of a weird one to write, but it has to be done. I know that this isn’t really a blog about Geeky Gems, Caelrona, Kirkiechick or my life, but if you will permit me, this one will start off as more of a personal kind of blog, but fear not, I’ll try to fit in some sort of geekery later on. I shall be taking a bit of a back seat around All Geek To Me Towers over the forseeable future. It’s been a bit of a crazy year for us here at All Geek To Me. We started this blog after a former attempt failed to mature into anything. Geeky Gem and I decided that we should try again, and we worked hard and came up with All Geek To Me. Since January, we have built up views and day by day, week by week and month by month, we have grown our views and site visits. I am very proud to say that as of the time of writing we have had 58,000 views, a number that we scarcely dreamed was possible.

11 months and 273 blogs later, we have built All Geek To Me into something we are all immensely proud of. Now I know it’s just a blog, but we appreciate every view, every comment, every like and follow. I still remember my first like for a blog, the excitement was palpable, and it still is a thrill to know that anyone read a blog I wrote, and actually took the time to comment, or like, so thank you to anyone who has ever done so. It is then, with great regret that I have to reduce my time here at All Geek To Me, however, I do have a good excuse. Recently I have kind of fallen head over heels in love with the most beautiful, amazing woman I have ever seen. She has an adorable 4 year old son, and we have been seeing a whole lot of each other. I don’t want to reduce this to dangerous levels of soppyness, but at the moment, I could not be happier. The social situation has not been kind to my time however, and I simply do not have time to write as much as I used too, and although I don’t really want to give up writing blogs, something has to give. I will still be here once a week to tap out a blog on my trusty keyboard, but the rest of the time I will be in work, or with my two favourite people on Earth (sorry, soppyness leaked in).

So with that done and dusted, time for some geekyness. November is a crazy time for video games, and although I have no time to play them, my geek soul would not let my wallet pass up the chance to part with some cash. Forza Horizon, WWE 13, Assassins Creed III, Black Ops 2 and Halo 4, have all been released and purchased by me in the last couple of weeks. I must be insane, as I have hardly touched any of them. What I will say though is that I have given up on multi-player. I have let my Xbox Live membership lapse, I have no interest in Black Ops multi-player or Halo for that matter, from now on, I’m strictly a one player kind of guy. What I will say is that Halo 4 is absolutely beautiful to look at, and a lot of fun to play, and I have had fun with all the games so far, just not had a whole lot of time to play them yet. 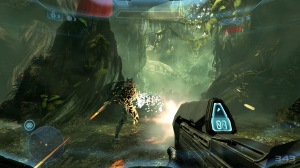 Movie wise, I haven’t really had time to watch anything in recent weeks, but The Hobbit looms large on the horizon, and I can not wait. In the world of books, I can confirm that I have finally finished A Storm of Swords: Steel and Snow, and have started Blood and Gold. That has taken me almost a year to read, but I finally knuckled down and did it, and what can I say? It’s fantastic, truly one of the greatest fantasy masterpieces ever written. I know I’m late to the party on this one, but bear with me, I’ll get to A Dance With Dragons in good time.

TV is a bit of a sore subject at the moment. I have been enjoying Dexter, The Office, Parks and Recreation and WWE Raw. I have also been forced into watching The X Factor. Dear God what a horrible, horrible show, but sometimes, you have to do these things, and at least it is almost over, it is right? Please say it is… 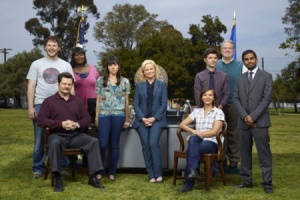 So that’s it for this week. I hope you enjoy the other blogs that Geeky Gem, Kirkie Chick and Caelrona are bringing you over the next 7 days, I know I will be. I’ll see you next week with something a bit more substantial geek wise.

As one weekly blog changes hands, another rises up to take Wednesday Whimsy’s place in my writing list. I’m not sure at this point whether this will be a regular blog, or if I will just use the title once in a while, but we shall see how it goes. As I have written elsewhere, my day job no longer allows for me to write whilst at work, and I am finding it increasingly difficult to find time to get any writing done at all, but I shall endure. I am still trying very hard to fit in all sorts of geeky activities, from movies, comics, books and even the occasional video game. In fact, it is about that very subject that I wish to talk about today. 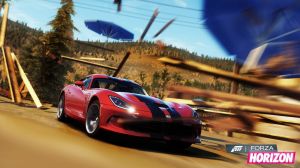 Now I haven’t played a game properly since Skyrim. That was the last time a game fully had my attention, and as one of the greatest games ever made, nothing had really held my attention. But as October rolled into November, and the big Christmas releases began to storm out of the gates, my interest returned. In the last two weeks I have bought 3 Xbox games, that’s more games than I have bought all year, and there are a few more I want before the year is done, as long as my wallet allows. But lets not get ahead of things, the first game I purchased, and the one I have played the most thus far, is Forza Horizon. I do love racing games, and I’ve had a lot of fun with all the Forza series, although I have always been a bit of a Burnout man myself. Forza Horizon is like a wonderful blend of Forza and a more arcadey racer, along the lines of Need For Speed or Burnout, and thus, I am very happy playing it. The graphics are beautiful, all wonderous landscapes, The Rocky Mountains and the surrounding areas are great to drive around. The cars are fantastic looking, and everything visually is stellar. The gameplay which I thought may cause me some problems at first, has proved me wrong. Much like Burnout Paradise, Horizon is based around a huge open world, which you have to drive around to different races etc. I wasn’t in love with this system in Paradise, but in Horizon, I found just driving around a great, and at times quite relaxing experience, with the races adding the thrills and spills in between. I have spent far too many hours racing around Colorado, but I’m loving every second, I literally had to drag myself off it to write this. Forza Horizon is fully recommended to those with a racing bent, absolutely my favourite game so far this year.

The next game I purchased, and it was only last Friday, is WWE 13. I’m loving my wrestling at the moment, and had a lot of fun with WWE 12. I have to say that WWE 13 improves on last years game in every way. The graphics are improved, with the character models simply amazing, especially in the cut scenes, which are used with audio footage of past events, I can actually remember watching the scenes that play out during the campaign, the models are that good. Of course, the big draw this year has to be the Attitude Era mode, which replaces the Road To Wrestlemania mode from last year. Attitude Era takes the player through the greatest era of wrestling, with stars like Stone Cold Steve Austin, The Rock, HHH, Undertaker, Mankind, and of course, the villainous owner of WWE himself Vince McMahon. The roster includes a huge number of Attitude Era legends, and a full roster of current superstars, but it is most fun reliving classic moments like Undertaker vs Mankind in Hell in a Cell, or the Montreal Screwjob. I was surprised that the game is so honest with it’s handling of the Monday Night Wars, with WCW, WWE’s big rival at the time, being given it’s due, and even when something extremely painful happens to a wrestler, the crowd chant ‘ECW’, very surprising and very cool to hear. I would definitely recommend this to any wrestling fan, and make that a must buy if you were a fan during the Monday Night War period. My only criticism would be that sometimes, the events that have to take place during the Attitude Era mode matches are a little vague, it took me a few times to work out what the game wanted me to do at times, but apart from that, this game is most enjoyable.

The last game I purchased, on the same day as WWE 13, hey big spender, was Assassins Creed III. I have been a big fan of all the Assassins Creed games thus far, although I haven’t yet finished Revelations. This is the game I have played the least so far. I think I’ve put in around 2 hours so far, and I have to say, I’m enjoying it. It is very similar to Assassins Creed games past, but if you likes them, I’m sure you will like this. The graphics have had a big overhaul, and everything looks much crisper and prettier. New character Conner plays a bit differently to Ezio or Altair. He is a bigger stronger guy, and his fighting style is more robust and violent, I even DDT’d someone, the developers based his fighting on wrestlers and MMA fighters. The setting of revolutionary America is great so far, and although I have read that some gamers are reporting glitches, as yet, I have not experienced them. I am looking forward to getting further into the game, and with a pretty open social life, at least until mid week, I am expecting I’ll get at least a few more hours in this week.

That’s it for the inaugural Monday Musings. I’ll be back Thursday, and don’t forget Wednesday Whimsy is still around, just written by Caelrona, and not myself. Have a great start to the week. 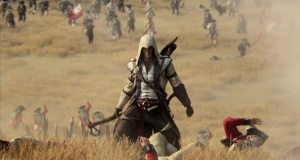