Archive for the tag “Gotham by gaslight”

I am kicking my Summer Knights series off today, and have decided to give you a run down of my personal favourite Bat based graphic novels. There are quite a few, so I shall not procrastinate here, except to say, Batman is my favourite super hero, and as such, I read more of his comics/graphic novels, than any other character.

Frank Miller tells the tale of the first year of Batman’s war on crime, and also Gordon’s first year in the GCPD. A gritty, dark, more realistic tale, this is the story of a man’s war for revenge on the criminal underworld that took his parents. The art work is stark and bold, but fits the tone perfectly. Any body looking to jump into the Batman mythos, would do well to look at this first, it is the perfect introduction to the character.

My personal favourite Bat story, this is set chronologically after Year One. Batman is now established, and his war on crime continues, with a serial killer on the loose who kills on holidays. The Holiday Killer is not The Dark Knights only problem, his continuing war on Gotham’s Mob families and super villians is also a large part of the story, and Harvey Dent is also becoming a problem. The Long Halloween has great artwork and is a great read, I urge you to check it out.

Dark Victory picks up where The Long Halloween left off. The Holiday Killer has been put away, but Gotham’s problems aren’t so easily solved. This is also a Robin origin story, and is probably the best one I have read. Usually I’m not a fan of Robin, but Jeph Loeb manages to create a narrative that fits in very well with Year One and Long Halloween, and doesn’t make the character of Robin too ridiculous. Great art again, this book is well worth a read.

The first Else-world book I ever read, Gotham By Gaslight is set in Victorian era Gotham City. A city that has been visited by the most notorious serial killer of them all, Jack the Ripper. Batman, in a vintage awesome costume, must face the Ripper and protect the ladies of the night that populate Gotham. This really opened my eyes to what Batman could be when I first read it. The Batman mythos is so strong, he can be placed in different eras and situations, and still work, and still be awesome. The fact I’m kind of fascinated by the mystery of Jack the Ripper was the cherry on top of the Batman sundae.

I was drawn to Hush by Jim Lee’s outstanding amazing art work. It’s been said time and time again, but Jim Lee is the best at what he does, I simply love his art work. Hush is a story about a character from Bruce Wayne’s past coming back to cause Bruce, and Batman problems. To be honest the story isn’t that great, it’s not bad, but there are better Bat stories out there. But when you turn each page and are faced with art work of this awesomeness, sometimes, the story doesn’t matter so much. Hush is a work of art. 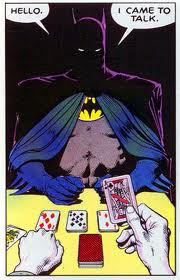 I’ve always been more of a fan of Frank Miller than Alan Moore, but it must be said, The Killing Joke is phenomenal. At it’s heart it is an origin story for the Joker, but is so much more. We get to see a glimpse at the complicated relationship between the greatest hero and villain in comic books, and a surprising last few panels. The Killing Joke is an important book in the Bat library, that I don’t want to spoil here, just check it out, you won’t be sorry.

So that’s it for part one, I will be concluding my look at the best Bat Graphic Novels later this week, I hope you will come back and check them out.