Archive for the tag “Side Effects”

Hello and welcome to the film chart this week!  We have a new number 1. The family film The Croods has knocked Oz the Great and Powerful off the top spot. This new film is the story of a pre-historic cave family who have to leave the safety of their cave home after an earth disturbance to find a new home. A long the way they see new wonders and meet new people. It does look funny and one for all the family. Let us see the rest of the film chart.

At number 2 is a new entry for Jack the Giant Slayer. A different take on the Jack and the Beanstalk story. A family film for everyone with an all-star cast. At number 3 we have Oz the Great and Powerful, still entertaining families before the Easter holidays. The film is amazing! I recommend you go see. At number 4 is Identity Thief, a comedy starring Jason Bateman as a guy who finds his identity has been stolen by a woman in another American state. Instead of going to the Police he decides to deal with the situation himself. Chaos ensues when he meets the woman. Side Effects is at number 5. A brilliant psychological film which will make you think. At number 6 is Wreck-It-Ralph. A fun child’s film but for everyone, based around a video game character, Ralph. Number 7 is a new entry with Stolen. Nicholas Cage stars as a con who is released from prison and wants to mend his broken relationship with his daughter. Unfortunately he has enemy who kidnap his daughter and the ransom is for him to rob a bank for her release. Welcome to the Punch is at number 8. It is a good gritty cop drama with twists and turns. A t number 9 is Parker. Jason Statham stars as a criminal out for revenge on his old cohorts. A number 10 is Mama. Still making audiences jump.

That is all for this week. This series of articles is taking a break and may be able to be found elsewhere in the near future! So look out for the top ten film chart by Kirkiechick.

Posted in Movies, top 10 movies and tagged identity thief, Jack The Giant Slayer, mama, Oz the Great and Powerful, parker, Side Effects, stolen, the croods, welcome to the punch, wreck it ralph | Leave a comment

Hello and welcome to this week’s chart! The number 1 has stayed the same, Oz the Great and Powerful. I went to see this last week. I really enjoyed it in IMAX 3D. The visuals are amazing and the 3D is worth it. I highly recommend watching in 3D. Let us see the rest of the chart.

At number 2 we have Side Effects. This film is an interesting thriller. I do recommend the film as a good psychological drama. A number 3 is a new entry with Welcome to the Punch. A British cop drama produced by Ridley Scott. The cast consists of a “who is who” of British television actors and a couple of big star British actors, James McAvoy and Mark Strong. I went to see this film and it did feel like a BBC cop drama. It is still a good film just very British with some stylised American camera shots. Wreck-It Ralph is at number 4, still bringing the families in to watch and probably a few adults too! At number 5 is Parker. A Jason Statham film. So think action and punch ups! Number 6 is a new entry with The Incredible Burt Wonderstone. From the trailer this looked really funny with Jim Carrey, Steve Carell and Alan Arkin. The story is the rivalry between two magicians who have been on the circuit for a long time and the threat of the new breed of magician. At number 7 is Mama. The film is very jumpy. It is worth a watch. Red Dawn is at number 8. A remake of an invasion film from the 1980s. This version stars Chris Hemsworth (Thor) and Josh Hutcherson (The Hunger Games). This time around instead of Soviet soldiers invading it is North Korean ones. Hansel & Gretel: Witch Hunters is still in the chart at number 9. A good action film. At number 10 is The Guilt Trip. It is a funny comedy and probably sons would recognise and embarrassing Mum is fusses over their sons!

Hello there! Welcome to the chart for this week! We have a new number 1 this week. It is Oz the Great and Powerful, classed as a prequel to the 1939 film The Wizard of Oz. This new film tells the story of how a magician ends up in the World of Oz and has to defeat the Wicked Witch. This film looks amazing visually. I am so looking forward to this film! Let us see how the rest of the film chart has done this week. 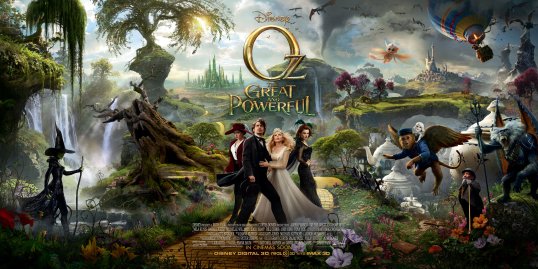 At number 2 we have a new entry with the film Side Effects. The director Steven Soderbergh has said this film is his swansong. It is the story of a woman whose husband has come out of prison but unfortunately she starts to feel anxious and can’t sleep at night. She goes to a doctor and therapist after an incident involving her car and a brick wall. She tries several drugs and after trying a new one, a tragic event happens. Is it because of the side effects of the drug? I went to see this film. I really I enjoyed it. It is many different types of a film, a thriller, drama or the story of drug exploitation by the medical profession. At number 3 is Wreck-It Ralph, still riding high in the chart. It is a good film and I thoroughly recommend for adults and children alike! At number 4 is a new entry with the film Parker. It is a Jason Statham film. The premise is a thief has been double crossed in the past and believed dead. He comes back with a new identity to seek revenge from his old crew and to steal their latest loot. At number 5 we have Mama. It is a jumpy film. I recommend because you think it is a scary film but it will lead you down a different path. You can see that Del Toro, the director of Pans Labyrinth has had an influence over this film. At number 6 we have Hansel and Gretel: Witch Hunters. This looks like an easy watch, lots of action and eye candy. Number 7 is a new entry with The Guilt Trip. A mother and son road trip with Barbra Streisand and Seth Rogen. I went to see this film and I found it sweet and funny in places. At number 8 is Safe Haven, a film for those romantics that believe love will save the day. At number 9 is A Good Day to Die Hard, the action film with Bruce Willis still bringing in the audiences. At number 10 is Les Miserables is still holding in the chart. People are trying to catch this film while it is still in cinemas.