Archive for the tag “Space Station”

As you may or my not know I am a fan of Star Trek and one my more favourite versions of the show was Deep Space 9 or DS:9 for short. I loved this show and never missed an episode.

The show is set in the Milky Way galaxy, approximately during the 2370s. It was the first and only Star Trek production to take place on a space station rather than a starship. However it did eventually have a ship added into it by season 3 we came to know and love the Defiant. To be honest this made the show better as they could explore better story arcs.

DS9 first aired in 1993 and ran for seven seasons, ending in 1999. Rooted in Gene Roddenberry’s Star Trek universe, it was the first Trek spin-off created without direct involvement from Roddenberry, although he did give his blessing to the concept shortly before his death in 1991. The series was created by Rick Berman and Michael Piller, not having Roddenberry on board didn’t take anything way from the work these guys did. If Roddenberry had lived longer I think he would have been very proud. 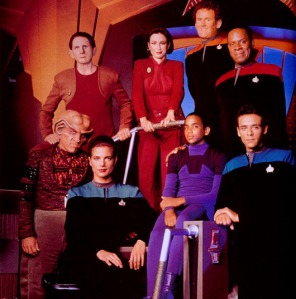 I think the main reason I liked this show was the fact that it was on a space station and not on a ship. this had led to many a debate with my boyfriend over whether its a real Star Trek or not s it doesn’t move. I say it is as it does have the Defiant, he says nope it doesn’t count and will not watch it. Oh well his loss as I love it.

See it counts right? There is a ship. I love the crew onboard the station as well, especially Avery Brookes who plays Captain Benjamin Sisko. Along with additon of many other great characters and story lines it really is  good show to watch. Don’t believe me then watch it. It has amazing special effects and brilliant story. Put this together with some fantastic characters and you have a show that will have you gripped before you can say light speed. Here are the opening credits for season 1.