As we have discovered over a number of weeks, the sight of the Dark Knight makes me go weak at the knees. To say I like the world’s greatest detective would be underplaying it in my eyes. I love Batman. Okay I am not all up on the legend, and I still don’t know who was Under the Red Hood, but I am getting there. 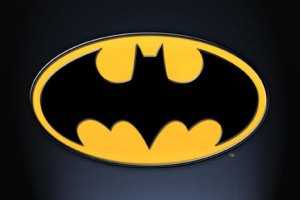 As I have already told you about my love with the comics, video games, and how I got started on the quest, I thought this time, as it is the last time, I would tell you about my love for the Batman in his most prolific form.

Batman has been in a number of movie adoptions, from cartoons to live action. Here, I am going to tell you about just a few, in a long list of fantastic big screen outings for the caped crusader.

First, I thought I would tell you about the first Batman film I saw.

When Tim Burton’s 1989 version of Batman came out I was only 6 years old. This however did not stop me from wanting to see the Dark Knight then played by Michael Keaton. However, due to the film being rated a 15, and I being only 6, seeing it in the cinema was no go for me. This was very hard for me as I was already a Batman fan, even if I was only watching Adam West in the role. Batman is Batman right?

Anyway, when I was finally allowed to watch the Dark Knight in all his glory I was one happy person. There is something about the way Burton directors that will have me watching no matter what he is doing. There is a style there that is unmistakable Burton and it’s a style he has never lost. Michael Keaton for me at the time was still Beetlejuice, but I could see past that and see him in this film. I think for this film, he was a perfect fit, as was Jack Nicholson as the Joker, who has some of the most brilliant dialogue ever.

The film is set in Gotham City, a dark, dangerous place, that is ’protected’ only by a mostly corrupt police, apart from D.A Harvey Dent and Police Commissioner Jim Gordon, Gotham is a very unsafe place to live. That is until a Dark Knight appears on the scene. As we all know, criminals are a superstitious lot, so he must be able to strike terror into their hearts, and so Bruce Wayne becomes The Batman. Although there have been many Batman films since, this one will stand out for me for so many reasons as it marked my long love affair, not only with Burton films, but Batman as well. From this small but awesome starting point, I moved through the Batman films, and the many changes of Batman in the forms of Michael Keaton, Val Kilmer (the less said about him the better), George Clooney, and the latest Batman, Christian Bale. But let us not forget the longest standing actor to play the Bat, good old Kevin Conroy.

Back to the Tim Burton Original, as always, the music for the film was provided but Burton’s long time friend and composer Danny Elfman, whose haunting soundtrack follows well with the action on the screen. Hard to think he wrote The Simpsons theme as well. That is why this film will always have a special place in my heart.

Another of the movies I have liked is actually a recent animated one; it was an adaptation of Frank Miller’s Year One.

As said above I have only just watched this movie and, read the comic not long after. I thought it was really good, the animation was stunning and music was fantastic.

Batman, in this adaptation, is voiced by Ben McKenzie, and Catwoman is played by one of my favourite actresses of all time, Eliza Dushku, both of whom are brilliant in this movie.

As the title would suggest, it chronicles Bruce Wayne’s life during the first year of becoming Batman. This story is as much about him as it about Catwoman and Jim Gordon’s first year in Gotham.

It’s a simple story of two men coming to Gotham City, one is coming home after a long time away and the other has been pushed there for being a good guy. They both go on a journey through this movie and learn some valuable lessons. As well as becoming the people we will know and love. At the start Gordon has to hunt Batman and bring him in, but by the end of the movie, events change and Gordon finds he needs The Batman.

My third pick for a Batman film that I loved is of course Batman Begins. 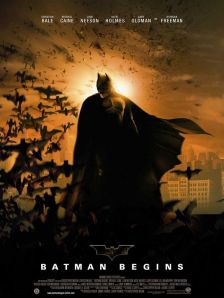 When Batman Begins hit our screens in 2005, I must admit I was worried. My first thoughts where here we go again, another badly made movie. Now I thought that, due to the fact I am not a big fan of the last two Batman movies. Then I heard Chris Nolan was going to be taking the helm and my mind began to change. I was less happy when Katie Holmes was cast, but I thought I would let that slip, as the fantastic Michael Cane had been cast as Alfred, The Dark Knights ever loyal butler. Then one day the Dark Knight himself was cast and was left wondering where this may go. Now I have to also admit that knowing that Batman was going to be Welsh man, did make me happy but the thought of it being Christian Bale made me less so. How wrong I was. He makes a brilliant Batman. He’s dark, edgy and full of rage. Little did I know I would learn to love this Batman.

There is something about the way Nolan directs these movies that leaves me wanting more, and not many movies do that to me. The cast is brilliant and is made even richer with Liam Neeson, Gary Oldman and Cillian Murphy, all of whom play their roles to the max. This film just takes Batman in a whole new direction. If you haven’t seen it, you are missing out.

You all know how much I love the Bat, some may say a little too much. To them I say in the words of Brain Blessed, ‘Shut Your Face’. The story and the myth behind Batman is one too rich to ignore, and I am so glad I found the world’s greatest detective, I have already learned so much from him and I bet I will learn a whole lot more.

Look I even bumped into him at the SFX Weekender. Bumped not stalked there different things okay? 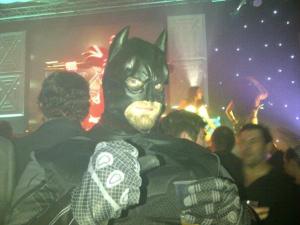 I hope you have enjoyed joining me on this journey, as much as I have enjoyed letting you in on my obsession. Besides who knows in the coming month’s I will no doubt find something else to obsess over and then I can tell you all about that.  I would like to thank Hmsbeefnuts and Kelvin for recommending movies, comics and all things Batman to me. Also thanks go out to BlitzEvo, Kirkie Chick and all my friends for putting with my somewhat unhealthy obsession.