As we all know, I love a good action movie. There is nothing I like more than watching a movie with very little story line and lots of things tha blow up. I recently watched The Expendables and I must admit I loved it, it had exactly what I wanted. All my favourite action stars and the right amount of stuff blowing up. So here is some trivia on the movie. 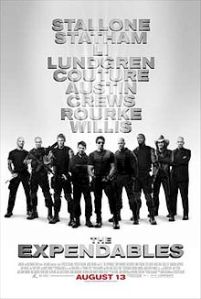 Jean-Claude Van Damme was offered a role, but he turned it down claiming that there was no substance in the character. Rumor has it that Dolph Lundgren replaced him but actually the part of Scandinavian Gunnar Jensen was written by Sylvester Stallone with Lundgren in mind.

Ben Kingsley, Robert De Niro and Al Pacino were considered for the role of Munroe.

Steven Seagal was asked to play a cameo but turned it down due to negative connections with producer Avi Lerner.

Dolph Lundgren described the film as “an old-school, kick-ass action movie where people are fighting with knives and shooting at each other.”

The role of Mr. Church, the man who hires the Expendables, was very difficult to cast. It was initially offered to Arnold Schwarzenegger, who declined in favor of a smaller cameo due to his political career. The role was then offered to Kurt Russell, who declined as he was not interested in “ensemble acting at the moment.” Sylvester Stallone spent several months after principal photography determined to find a big action name for the part. The role was finally taken by Stallone’s friend and fellow former “Planet Hollywood” co-owner Bruce Willis, who was busy filming Cop Out at the time.

The initial budget for the film was $60 million but increased to $70-$80 million.

On October 24th, 2009, Sylvester Stallone was joined on-screen for the first time ever, with Arnold Schwarzenegger and Bruce Willis. The scene, which took six hours to film, sets up the plot of the film.

This is the third film that Jason Statham and Jet Li have starred in together. They previously starred in The One and War.

The silver badge on General Garza’s right breast is actually a United States Army Combat Action Badge. It is awarded to non-infantry soldiers who have actually engaged an enemy force in combat, and worn on the left breast. Since it would be nearly impossible for a foreign general to earn a CAB legitimately, the costume department most likely simply picked out a random military badge.

There we have it for another week, I hope you keep coming back to see what other delights I have for you.